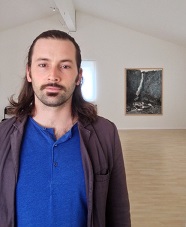 The first time I met him, I was impressed by the clarity and the precision he could explain complexe thing. In his eyes there was that shine, that people has, when are passionated about a subject and get more excited, by discovering new knowledge while talking. We began to talk, and when I asked him about a physical sensation he had in the arm, the arm began to shake. He got stressed, and breathed quickly.
„You see, my arm does what he wants. I cannot control it, it just moves and when I eat I make a mess around and I m happy when I reach my mouth with the spoon.“ There was a mixture of stress, shame and self-ironie.
„Ok. Just take a few deep breath.“ I told him and put a hand on his chest.
He closed his eyes, paying attention to the chest and to the air coming in and out of his lungs and relaxed very quickly, and began to talk as nothing happened. I asked him, if he realized how quick he could stop the shaking. Said „yes, is true.“
The scene repeated a few times. A sensation came, the arms shaked, he payed attention breathing deeply and the arm stopped to shake. At the end of the session, the body was completely calm, his voice soft and there was no stress at all. I asked what he learned and how he could use the learning. He answered confident „When I shake, I will remember to breath.“

ON & OFF
After a week, he couldn’t remember, much happened in between. So many changes between ON and OFF. In the parkinson language, the person is in the OFF mode when feel paralized or frozen, he cannot move part of his body, and the ON mode is when the person is shaking and moving without controlling his body. There was a distance, between the physical sensation and the thinking about the sensation, and in both phases the person couldn’t control what the body does.
Sometimes the feelings take over, and the person couldnt manage them, he moved his awareness to his mind, where the fear is malleable, but has no reference point, time stretch and everything feels uncomfortable and endless.
In the process, the person was able to learn, to control a part of the shaking as long I was close to him a gave instruction. The challenge was to teach him to take responsability about what is going on in the body and use it on his own, in the daily life.
Traditional medicine considers Parkinson as a degenerative disease, and I think it can become degenerative, because the repetition of stressful sensations, requires constant discipline and a strong will to change something, and can be very tyring.
The intention to stay in contact with the body and accept again and again mixtures of unpleaseant feelings, uncontrolled body movement and the frustration that a simple action, like sitting on a chair, can take a very long time.
The willpower express also physically, so I think that for a person with Parkinson a physical therapy is necessary to maintain the body active. Personally I choosed to focus on breathing as the main lesson for the whole process, because I saw the most sustainable results. Deal with the anxiety of not being able to move, manage the stressful shaking and learn to not overcome fear, were secundary aims.

MOVE!
After some sessions, I searched for a different strategy, because I wanted the person to raise the level of participation and involvement, so I decided to make some try with music and stopping movement. The pleasure in the movement and in the rhythm brought results of relaxation and the feeling of being again the master of the own body. He enjoyed to move and could control better the way he moved.
I did also some research and I tried out some exercises from the Gyrokynetics Method from Alex Kerten (http://www.parkinson-gk.com/english/about/about-the-method/) and took also some inspiration from Mark Morris Dance for PD (http://danceforparkinsons.org/)
The basic idea from Gyrokinetics is to teach the person, to become a healthy person that deals with Parkinson Disease, instead of identifying with the disease itself and act like „following a script“ in which the symptoms are part of a role.
Movement and expression are considered relevant to maintain the contact with the body and with the outwards world. Music stimulates also the natural pharmacology of the body, so that the brain produce dopamine by listening to music.
In the Parkinson disease, the neurotransmitter dopamine reduce and this create consequences like the reduction of attention, less memory for learning, uncontrolled movement, less sense of motivation and satisfaction, and a bad quality of sleep.
After some try with individual sessions and movement, I was satisfied to see some changes, however the process of learning to trust the own body and the own pharmacology is still going on. As a practitioner I’ve learned to follow the flow, no matter if shakes, if the muscles doesn’t respond, or the body jumps from laughing.
And I m amazed how music has the effect of medicine on the body.

Loris Ciresa is a Qualified Practitioner of the Grinberg Method in Luzern, Switzerland.